In the late 90s there was some craziness in the air. Everybody perceived Internet was going to transform our lives. But we didn’t know how. Companies tried to grow at all costs, setting up what looked like crazy ideas. Money was being poured without any analysis. 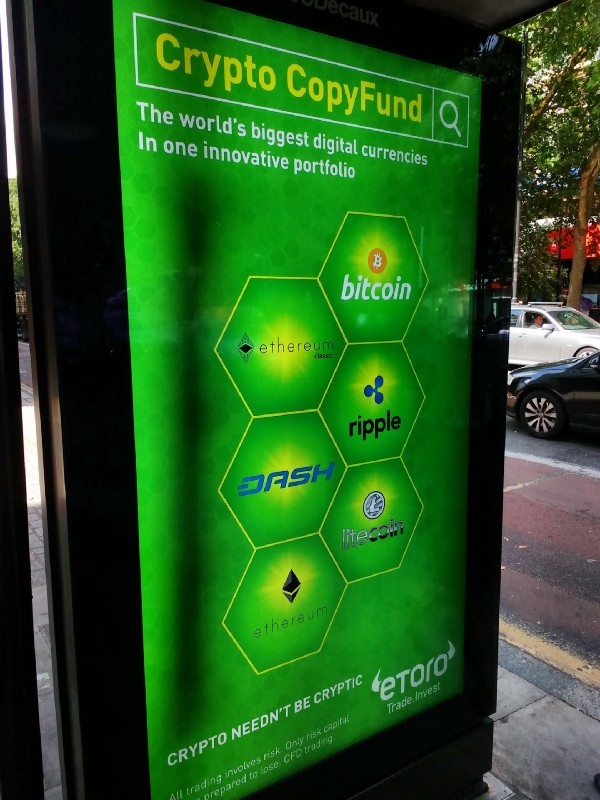 Crypto investments being announced in a bus stop in the middle of London.I remember vividly that some people around me were trying to setup a startup, raise money with some vague promise, and be rich. You were supposed to run if you didn’t want to miss the gold rush. And you were a failure if you didn’t even bother.

Yes. Internet has transformed our lives. It has changed news, media, transportation, and retail beyond recognition. And it’s part of almost anything else.

But you won’t remember many of the companies of those days. Because many of them crashed or vanished.

These days I’m having that same feeling. One friend who asked me about “doing something on Bitcoin”. Gossip on how to invest and what are the hottest cryptocurrencies, asking a colleague who incidentally is about to leave my company for a crypto businees unit in a bank. Crypto investments being announced in a bus stop in the middle of London. Guides to setup your own currency. Crazy ICOs with lots of things to demonstrate but already huge valuations. Code is law until it isn’t. Fraud and stealing. Parody raises 70k.

I’m not the only one on thinking this. But I wanted to say it.

I know some you will say “You don’t get it. CryptoCurrencies are going to change the world.” I’m not sure, but let’s agree on that.

But that doesn’t change a thing. There will be huge success, that nobody is seeing today. And most of the current companies/currencies will disappear.

Do you remember Terra?