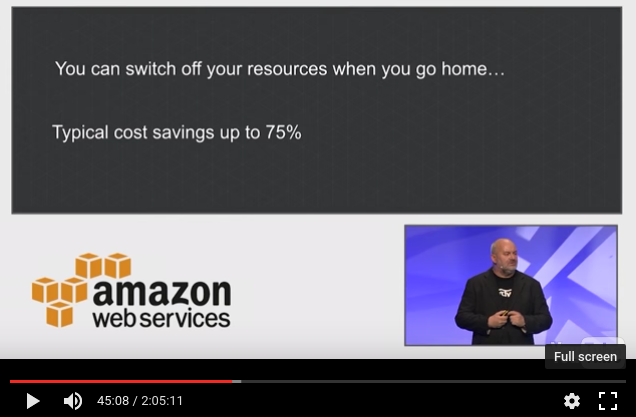 Werner’s keynote — https://youtu.be/65unhiJNaok?t=2692A few months ago, I went to AWS Summit London 2016. One of the takeaways for me was that the cloud is not only the ability to scale up, but also down.

And in particular, that you can shut down your servers. And you should if they are not used.

I knew the idea wasn’t strictly mine. What I didn’t know until I was preparing this post is that the idea came from Amazon’s CTO.

Take a look at the picture. Werner himself is telling us that you should switch off your servers when you go home.

When I got the office the following day, I suggested killing most of our development environments every night at 6:30 pm and start them again at 6:30 am.

And we implemented it.

And we’ve been shutting down servers at night, for the last six months, in many of our development environments.

And the experience has been overwhelmingly positive.

However, every time I explain that we kill development every night, I face surprise and in many cases rejection.

For some time I couldn’t understand questions like “cannot you afford the cost?”, “have you considered spot instances?” or ”is it a good practice?”.

Now, when I hear those questions (and, believe me, I hear them a lot), I force myself to remember that yes, it is an obvious idea for me today. But for me it wasn’t obvious 6 months ago.

So I have decided that if I want to stop being considered a freak or a penny pincher, it is time to start explaining the advantages. If I want this to be considered a good practice, it’s better to speak publicly about it.

And if it is not a good practice, better to know quickly (so please comment)

In terms of advantages, the most obvious one is cost. If you start shutting down dev at night and during the weekends, you may reduce your costs a lot. 5 days a week, 12 hours are 60 hours a week, instead of the 168.

So in terms of costs, you may reduce your compute costs quite a bit. Not 75% as Werner mentions. In our case it was like 25%. Which is not a minor issue.

But you implement the changes, and then your cloud expenses keeps going up because you use more resources. And in a few months time you are spending more.

The other big advantage is reliability**.** For me this is the less obvious but bigger gain.

Shutting down your servers makes your system more reliable. Because it forces you to follow other good practices:

I perceive there is a third advantage, in a way related to both cost and reliability. It’s conceptual.

Cloud has two main dimensions. One is scale. And the other is failure.

In terms of scale, people think that means you can grow without limit. But we tend not to think about shrinking when we don’t need the resources.

And we tend not to think about failure. On aggregate, cloud may be more reliable than our own datacenters. But cloud is failure.

If you kill your development environment when you are not using it, you are scaling down with your use. And you are also incorporating failure tolerance in your system.

And that makes you start thinking in a different way.

I noticed it when I cringed when a colleague was interacting with a Security Group from the web console. It felt unnatural.

But the different way of thinking is pervasive.

Not everything is great#

If you’ve read thus far, you may be tempted to think that everything is wonderful and you’re already deciding how to move to this “environment killing” world.

And that is great, believe me.

But you may face some challenges too.

There are many people that have moved to the cloud but keep thinking in terms of datacenters. You create servers, you patch them, you even take care of them. Yes, you use Configuration Management Tools (Chef, Ansible…) to create infrastructure and to manage it. But the creation scripts are not frequently used.

Dare to kill your servers every night.