A friend of mine sent to me a job offer. It caught both her and my attention because it shows a problem very common in Internet companies.

The company in question is quite successful in its niche. They have an IT platform based on LAMP/Wordpress stack. And they want to change to a new platform using technologies yet to define. So they are trying to recruit a Lead back-end developer to keep the old platform working while creating the new platform.

The interesting part is that the list of skills/requirements were… basically being an expert in LAMP/Wordpress. No other skills required (not even experience in designing architectures). When the old platform is already changing under their feet.

The specific problem in this case was related to the use of a specific technology. But the more general problem is feeling you (as a company) need to evolve, but not finding the way to do it.

And there are several examples.

Those struggling to evolve

The first example among those struggling to evolve must be Twitter.

Twitter has a well established base of loving users. It has a wonderful platform. But it’s a public company, with share price well above its current business.

So it has to bring non-core users into the platform.

Everybody had a plan for doing it. But its board hired one of its founders (Jack Dorsey), to bring new life into the company. Jack Dorsey’s approach could be summarized around the phrase “you’ve got to crack some eggs to make an omelette”. He let some people go, and it’s changing the interface of the product. And yes it’s bringing in some new functionalities. We’ll see how it pans out.

Another example among those struggling is Microsoft. They had some very successful products: Windows, Internet Explorer, Office, XBox. Internet Explorer is competing with Firefox for not being third in desktop. And it is not existent in mobile (phone/tablet). Windows and Office are used mainly in the enterprise, and are being made obsolete by mobile. XBox will be phased out by tables and new devices (Chromecast/Applet TV)

So they needed a change. And they brought in a new CEO that it’s trying to change everything. From embracing open source, to buying Minecraft and integrating it with Hololens, Microsoft has demonstrated, you can be cool again. But less visible initiatives, like its Azure mixed-cloud could keep the revenue cow giving milk.

The last example I wanted to point is Foursquare. They perceived they had two different uses under the same product, so they decided to split. The result was clearly disappointing and the company needed to backpedal. Sometimes competing with yourself isn’t enough.

Those successful against themselves

Obviously, not all cases of evolving are pear shaped. There are plenty of companies that has managed to successfully change. The first successful example is Facebook.

I don’t like its main product (it’s almost a pain for me to use it).

But I love the company. As an example, take a look to this mention in their “Red book” (new employee’s induction documentation) “If we don’t create the thing that kills Facebook, someone else will”. 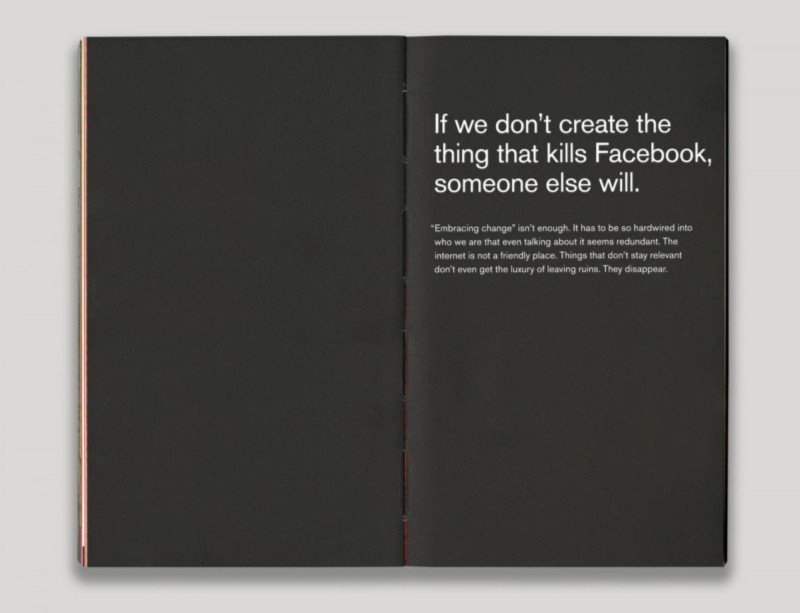 Facebook is building according to a long term plan. But they are not afraid to buy whatever is needed in the way.

**Google **has a different approach. Yes, it also buys companies. In fact, not many will remember, they bought a microblogging service when Twitter was not THE platform yet. Google approach is more chaotic. They bring to life lots of different initiatives, and are not afraid to kill those that doesn’t pan out. The best example for me is the whole Inbox vs Gmail competition. Who would create a new service competing with its own service?

For me, the whole Alphabet vs Google is more about the same. In 10 years time you may know Alphabet as a healthcare company, or a car manufacturer (or even better, logistic company), instead of an advertising company (yes, you may think it still is a search engine). Or maybe not. Pure evolution: have big number of bold initiatives and let them grow.

Amazon is another example of not being afraid to evolve. They envisioned Amazon computation infrastructure should be able to evolve automatically. Amazon business is cyclical (and when this article is written we’re in a peak period) So being able to increase and decrease computing power could mean savings. They then started selling that computing power. And now the cloud business profit is bigger than the rest of the company combined.

But not evolving is dying.