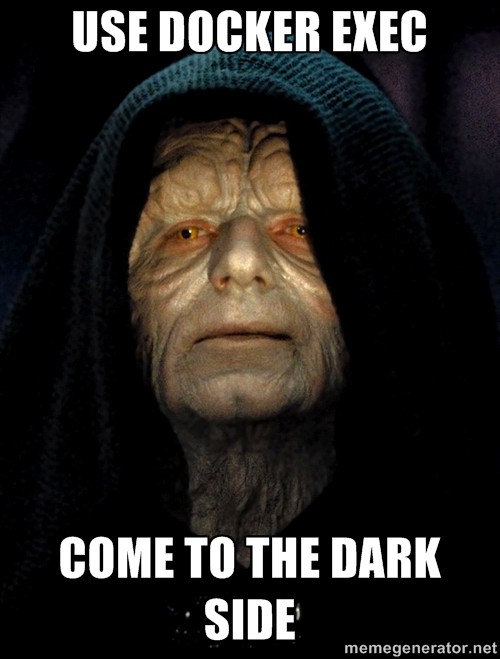 “Thou shall not pass” “docker exec, lets install wireshark”This is my account of some experiences deploying docker (or should I say messing/faffing with docker). The path has not yet finished, but I wanted to share our experience in case it can help others.

Yeah, there are many other different technologies for deployment. But containers were “hot” and “the future”. Don’t get me wrong, I do think containers are the new processes.

Almost from day one we used docker to deploy our software both in development and “production” (more as in user testing) environments. Initially it was quite ad-hoc: two web applications, a database and a search index. The whole process was deployed using ansible. Containers were linked together.

It was painful at first. Particularly for those of us using docker in OSX. But the pain was for a greater good.

At one point we had several servers, but each with its own copy of the stack. And a load balancer. That worked because our stack was largely immutable. Yes including the data. As part of the deployment process we would recreate the database and search index.

We then introduced authentication (don’t ask) And then, our infrastructure couldn’t be managed with a cluster of disposable independent stacks of containers. We needed to somehow manage a cluster. We did a quick research, and the consensus at that moment was CoreOS.

Believe me if I tell you this is painful.

The cluster was able to work as a cluster of containers. But the system was hacky: we changed the ports in the web applications to avoid collisions, we removed dependencies because we couldn’t bootstrap the cluster otherwise, we had some front-end stuff that couldn’t live in the same machine even if there were no other constraints because of ports, the scripts were super coupled, upgrading/deploying was not for the faint of heart…

One day we discovered one of the nodes wasn’t working properly. We end up killing the node, and the autoscaling group (AWS) worked flawlessly creating a new node. The new node got added to the cluster, and fleet started adding containers to the new node. Everything worked fine.

But upon investigating the old node, we started to get a bit upset with CoreOS. On the logs there were some rkt traces despite we were using docker exclusively. There were signs of a booting process without a record of it in the logs. There were also traces of auto-update connections despite we had disabled auto-update. We had disabled auto-update because each update would render our client tools obsolete. We had done what the official docs say should be done to disable updates, but it hadn’t worked (probably a Restart=always in the service unit has something to say)

It was a turning point, and we stop trusting our system.

Everything was working. But suddenly everything looked too brittle. It was brittle before. It wasn’t really CoreOS/fleet fault.

I had discovered this presentation. If you’ve read this far, you’re interested in this topic. Do watch it. And I really mean it.

I knew there was some other way. So I started doing some research. And the number of available tools was overwhelming.

We know fleet and etcdctl are very low level. And I was initially sold about Kubernetes. So I started focusing on Kubernetes. And what I’ve discovered is that

These decisions are difficult. Should I choose mature but risky or super active but not quite there?

Sometime ago I used heroku to deploy a Ruby on Rails to deploy a side project of my own. The project was stalled but a few weeks ago I planned to revamp it. So I decided to self-host it. But I didn’t want to configure all the infrastructure for hot deployments and so on.

So I decided to give a go to dokku.

It was really surprising to have something so painless to setup (3 hours, mostly fighting with my own SSL certificate) and update (git push) And yes, there are things like that for a cluster.

Not that we can use it at the office at this point.

But we’ve dedicated too much effort to deployment at a point when we had very little to deploy. Sometimes we in the startup world build our own heroku.

There are many competing technologies. You need to bet. We haven’t decided yet, but we will probably go Kubernetes because it’s more active and there are some amazing features compared to what we have. We won’t use the default script that launches a cluster, but will pack the tools in master/minion images(vagrant/ami). So basically we will design your own cluster.

But I remember when mongodb was cool and then it stopped being cool.

Will we discover down the line that it wasn’t a good bet?