EDIT: I’ve done again the calculations and are more unbelievable even. I won’t update this post but IMO it is quite reasonable to hit the target.

From time I tend to write about the Spanish budget deficit.

Almost nobody expects that Spain will meet its commitment around budget deficit for 2012.

Well. I want to say, that, regarding central government, I do think they are going to hit the target. There are others components of the budget deficit (regional and local government, and social security agency). And I don’t know how do they go. But the target for the central government is 38bn euros, and the data for the twelve month period ending in November is 44bn, down from 76bn in July. 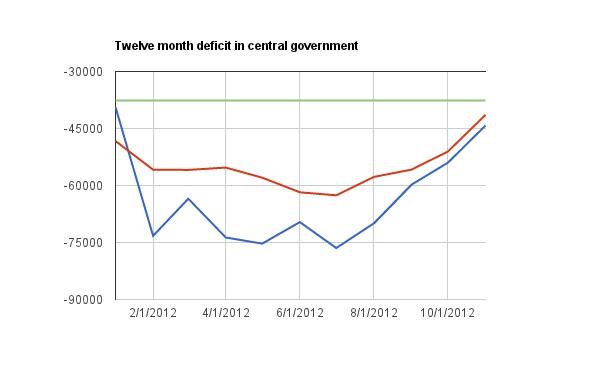 Limitations of the chart (not quite proficient using Google Docs). No legend. Green line is target, red is cash flow data and blue accounting data. Bear in mind that the y-axis does not start in zero, and x-axis show days but should be monthly data.

Anyway, I find it pretty impressive. I’ve seen it since August and still can’t believe it.