This is one of my political/economical post (nothing related with computers) I write from time to time.

Many well respected analysts suggested or explicitly wrote that maybe new Government was increasing 2011 deficit so that it could blame previous Government, and also in order to make it bigger so that it was easier to make it smaller. One for all, Xavier Xala i Martin:

Even EU Commission was expected to open an investigation to clear if Spain had overestimated deficit for political purposes.

I couldn’t believe it. If there had been any kind of manipulation in Budget deficit Spanish figures it has been downwards, not upwards.

I expected somebody could examine the data in a similar way, as I had been doing, and tell everybody 8.5% budget deficit in Spain for 2011 shouldn’t have been a surprise. When I started to read this post of Edward Hugh, I thought “he finally got it”, until I got to the part: “the deficit itself will not form the primary subject matter of this post.”

OK. So maybe I’ve come a to a methodology to study monthly/periodic data so that we can anticipate its evolution before end of year. [laugh]

Sometimes you get the data for all the previous periods of the same year. For example, you get data for the 3Q2011, and accumulated with 1Q2011 and 2Q2011, compared with the first three quarters of 2010.

I use a simple method.

If you want to know some value at the end of the present year, but you don’t have data of the whole year, you should take data equivalent to a twelve month period.

February, 28th. Official figure: 91344(*). And everybody said the government was forging the data upwards.

Look the following data, and tell me somebody forged it (December 31st, 2011 data is official figure). 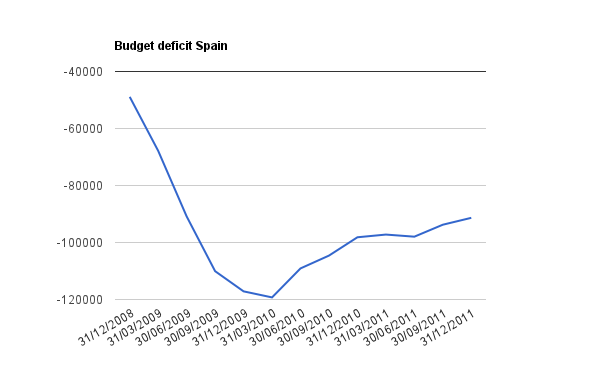 (*)The official figure is an estimation, and is not homogeneous with the quarterly data. The fourth quarter is still to be closed in accounting terms.